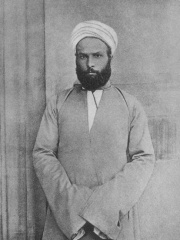 Muḥammad ʿAbduh (1849 – 11 July 1905) (also spelled Mohammed Abduh, Arabic: محمد عبده) was an Egyptian Islamic scholar, journalist, teacher, author, editor, judge, and Grand Mufti of Egypt. He was a central figure of the Arab Nahḍa and Islamic Modernism in the late 19th and early 20th centuries.He began teaching advanced students esoteric Islamic texts at Al-Azhar University while he was still studying there. From 1877, with the status of ʿālim, he taught logic, theology, ethics, and politics. Read more on Wikipedia

Among philosophers, Muhammad Abduh ranks 187 out of 1,081. Before her are Claude Adrien Helvétius, Emmanuel Levinas, Posidonius, Hippasus, Han Fei, and Jakob Böhme. After her are Sextus Empiricus, Athanasius Kircher, Melissus of Samos, Pseudo-Dionysius the Areopagite, Ernest Renan, and Pierre Bayle.