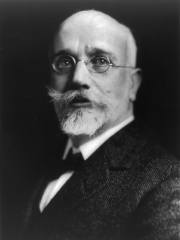 Eleftherios Kyriakou Venizelos (Greek: Ελευθέριος Κυριάκου Βενιζέλος, romanized: Elefthérios Kyriákou Venizélos, pronounced [elefˈθeri.os cirˈʝaku veniˈzelos]; 23 August [O.S. 11 August] 1864 – 18 March 1936) was a Greek statesman and a prominent leader of the Greek national liberation movement. He is noted for his contribution to the expansion of Greece and promotion of liberal-democratic policies. As leader of the Liberal Party, he was elected eight times as Prime Minister of Greece, serving from 1910 to 1920 and from 1928 to 1933. Read more on Wikipedia

Eleftherios Venizelos is most famous for being a Greek Prime Minister and for his role in the Balkan Wars.

Among politicians, Eleftherios Venizelos ranks 1,333 out of 15,577. Before him are David II of Scotland, Ghazan, Jephthah, Lazar of Serbia, Millard Fillmore, and Theodor Heuss. After him are Chlodio, Kara Ahmed Pasha, Polycrates, Christine Lagarde, Cheoljong of Joseon, and Wenceslaus III of Bohemia.