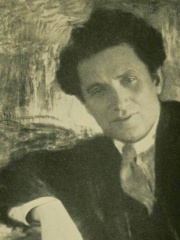 Grigory Yevseyevich Zinoviev (born Hirsch Apfelbaum, 23 September [O.S. 11 September] 1883 – 25 August 1936), known also under the name Ovsei-Gershon Aronovich Radomyslsky, was a Russian revolutionary and Soviet politician. He was an Old Bolshevik and a close associate of Vladimir Lenin. During the 1920s, Zinoviev was one of the most influential figures in the Soviet leadership and the chairman of the Communist International. Read more on Wikipedia

Grigory Zinoviev was a Bolshevik revolutionary and a Soviet Communist politician. He was one of the seven members of the first Politburo, founded in 1917 to manage the Bolshevik Revolution. He was also a member of the Central Committee from 1917 to 1926.

Among politicians, Grigory Zinoviev ranks 1,068 out of 15,710. Before him are Louis I of Spain, Himiko, Aristides, Idris of Libya, Zacchaeus, and Frederick I of Sweden. After him are Pedro II of Brazil, Octavia the Younger, Li Si, Andrew Johnson, Clement Attlee, and Xuande Emperor.