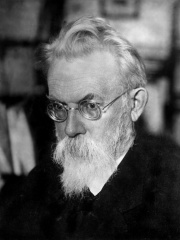 Vladimir Ivanovich Vernadsky (Russian: Влади́мир Ива́нович Верна́дский) or Volodymyr Ivanovych Vernadsky (Ukrainian: Володи́мир Іва́нович Верна́дський; 12 March [O.S. 28 February] 1863 – 6 January 1945) was a Russian, Ukrainian and Soviet mineralogist and geochemist who is considered one of the founders of geochemistry, biogeochemistry, and radiogeology.During the Russian Civil War he was elected as the first president of the Ukrainian Academy of Sciences (now National Academy of Sciences of Ukraine), for this reason he has also been considered a Ukrainian scientist in historiography, although Vernadsky personally regarded Ukraine only as historical part of Russia and even declined to become a Ukrainian citizen in 1918. Similar views expressed his son, the historian Georgy Vernadsky, an author of numerous books on Russian history. Vladimir Vernadsky is most noted for his 1926 book The Biosphere in which he inadvertently worked to popularize Eduard Suess' 1885 term biosphere, by hypothesizing that life is the geological force that shapes the earth. Read more on Wikipedia

Vladimir Vernadsky is most famous for his concept of the biosphere, which he defined as the sum of all the living things on Earth and the processes that sustain them.

Among BIOLOGISTS In Russia