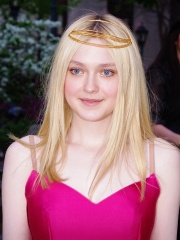 Hannah Dakota Fanning (born February 23, 1994) is an American actress. She rose to prominence at the age of seven for her performance as Lucy Dawson in the drama film I Am Sam (2001), for which she received a Screen Actors Guild Award nomination at age eight, making her the youngest nominee in SAG history. Read more on Wikipedia

Since 2007, the English Wikipedia page of Dakota Fanning has received more than 14,040,356 page views. Her biography is available in 66 different languages on Wikipedia making her the 2,581st most popular actor.

Among people born in 1994, Dakota Fanning ranks 4. Before her are Justin Bieber, RM, and J-Hope. After her are Kepa Arrizabalaga, Memphis Depay, Emre Can, Kai, Maluma, Federico Bernardeschi, Harry Styles, and Marquinhos.