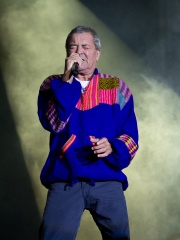 Ian Gillan (born 19 August 1945) is an English singer who is the lead singer and lyricist for the rock band Deep Purple. He is known for his powerful and wide-ranging singing voice. Initially influenced by Elvis Presley, Gillan started and fronted several local bands in the mid-1960s, and eventually joined Episode Six when their original singer left. Read more on Wikipedia

Ian Gillan is most famous for being the lead singer for the rock band Deep Purple.

Among singers, Ian Gillan ranks 69 out of 3,541. Before him are The Notorious B.I.G., Víctor Jara, Rod Stewart, George Michael, 50 Cent, and Anna Magdalena Bach. After him are Billie Holiday, Johnny Hallyday, Florence Foster Jenkins, Karel Gott, Bonnie Tyler, and Fairuz.