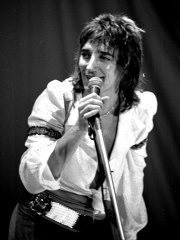 Sir Roderick David Stewart (born 10 January 1945) is a British rock and pop singer and songwriter. Born and raised in London, he is of Scottish and English ancestry. With his distinctive raspy singing voice, Stewart is among the best-selling music artists of all time, having sold over 250 million records worldwide. Read more on Wikipedia

Rod Stewart was most famous for his music. He is a singer and songwriter with a career spanning more than 50 years. He has written and recorded many songs, including "Maggie May," "You Wear It Well," "Tonight's the Night," "Hot Legs," "Young Turks," "Sailing," "I Don't Want to Talk About It," "Rhythm of My Heart," "Do Ya Think I'm Sexy?" and "Have I Told You Lately."

Among singers, Rod Stewart ranks 63 out of 3,528. Before him are Kurt Cobain, Sarah Vaughan, Stevie Wonder, Eminem, Carlos Gardel, and Amália Rodrigues. After him are Salvatore Adamo, Víctor Jara, The Notorious B.I.G., Ian Gillan, Klaus Meine, and Diana Ross.