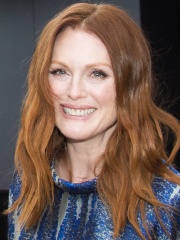 Julie Anne Smith (born December 3, 1960), known professionally as Julianne Moore, is an American actress and author. Prolific in film since the early 1990s, she is particularly known for her portrayals of emotionally troubled women in both independent films and blockbuster productions. She is the recipient of numerous accolades, including an Academy Award, a British Academy Film Award, two Golden Globe Awards, two Screen Actors Guild Awards, and two Emmy Awards–one Primetime and one Daytime. Read more on Wikipedia

Julianne Moore is most famous for her roles in the movies "Boogie Nights," "The Hours," and "Magnolia."