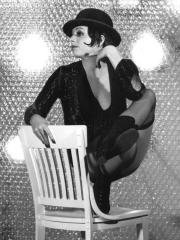 Liza May Minnelli ( LY-zə; born March 12, 1946) is an American actress, singer, dancer, and choreographer. Known for her commanding stage presence and powerful alto singing voice, Minnelli is among a rare group of performers awarded an Emmy, Grammy (Grammy Legend Award), Oscar, and Tony (EGOT). Minnelli is a Knight of the French Legion of Honour.Daughter of actress and singer Judy Garland and director Vincente Minnelli, Minnelli was born in Los Angeles, spent part of her childhood in Scarsdale, New York, and moved to New York City in 1961 where she began her career as a musical theatre actress, nightclub performer, and traditional pop music artist. Read more on Wikipedia

Liza Minnelli is most famous for her singing and acting career. She is the daughter of Judy Garland and she was born in 1946.