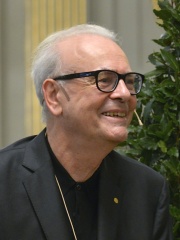 Jean Patrick Modiano (French: [ʒɑ̃ patʁik mɔdjano]; born 30 July 1945), generally known as Patrick Modiano, is a French novelist and recipient of the 2014 Nobel Prize in Literature. He is a noted writer of autofiction, the blend of autobiography and historical fiction.In more than 40 books, Modiano used his fascination with the human experience of World War II in France to examine individual and collective identities, responsibilities, loyalties, memory, and loss. Because of his obsession with the past, he was sometimes compared to Marcel Proust. Read more on Wikipedia

Patrick Modiano is a French novelist and winner of the 2014 Nobel Prize in Literature. He is best known for his novels, which often explore the themes of memory and identity.