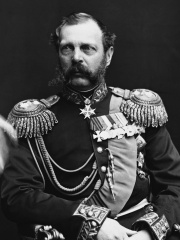 Alexander II (Russian: Алекса́ндр II Никола́евич; 29 April 1818 – 13 March 1881) was the Emperor of Russia, King of Poland and Grand Duke of Finland from 2 March 1855 until his assassination.Alexander's most significant reform as emperor was emancipation of Russia's serfs in 1861, for which he is known as Alexander the Liberator (Russian: Алекса́ндр Освободи́тель, tr. Aleksandr Osvoboditel, IPA: [ɐlʲɪˈksandr ɐsvəbɐˈdʲitʲɪlʲ]). The tsar was responsible for other reforms, including reorganizing the judicial system, setting up elected local judges, abolishing corporal punishment, promoting local self-government through the zemstvo system, imposing universal military service, ending some privileges of the nobility, and promoting university education. Read more on Wikipedia

Alexander II of Russia is most famous for the emancipation of the serfs, which was enacted in 1861.

Page views of Alexander II of Russias by language

Among politicians, Alexander II of Russia ranks 288 out of 15,710. Before him are Bill Clinton, Herod Antipas, Jacques Chirac, Charles VIII of France, Eva Perón, and Xi Jinping. After him are Victor Emmanuel II of Italy, Nerva, Croesus, Sejong the Great, Rudolf II, Holy Roman Emperor, and Cardinal Mazarin.