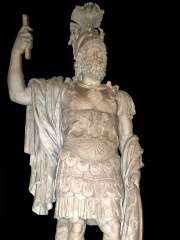 In ancient Roman religion and myth, Mars (Latin: Mārs, pronounced [maːrs]) was the god of war and also an agricultural guardian, a combination characteristic of early Rome. He was the son of Jupiter and Juno, and he was the most prominent of the military gods in the religion of the Roman army. Read more on Wikipedia

Mars is most famous for being the fourth planet from the sun and the second-smallest planet in the solar system.

Page views of Mars by language

Among politicians, Mars ranks 181 out of 15,710. Before him are Henry II of France, Björn Ironside, Gamal Abdel Nasser, Alexander I of Russia, Dwight D. Eisenhower, and Rodrigo Duterte. After him are David Ben-Gurion, Ibrahim of the Ottoman Empire, Al Gore, Charles VI, Holy Roman Emperor, Puyi, and Frederick II, Holy Roman Emperor.