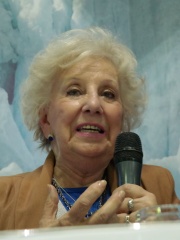 Enriqueta Estela Barnes de Carlotto (Buenos Aires, born 22 October 1930) is an Argentine human rights activist and president of the association of Grandmothers of the Plaza de Mayo. One of her daughters, Laura Estela Carlotto, was kidnapped and missing while pregnant in Buenos Aires, in late 1977. Through stories, she could ascertain that her daughter had given birth to a boy, and that her grandson was appropriated and his identity changed. Read more on Wikipedia

Among social activists born in Argentina, Estela de Carlotto ranks 3. Before her are Che Guevara (1928) and Adolfo Pérez Esquivel (1931). After her are Maria Verónica Reina (1964).