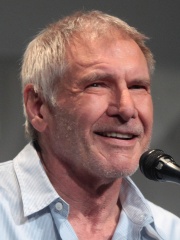 Harrison Ford (born July 13, 1942) is an American actor. His films have grossed more than $5.4 billion in North America and more than $9.3 billion worldwide, making him the seventh-highest-grossing actor in North America. He is the recipient of various accolades, including the AFI Life Achievement Award in 2000, the Cecil B. DeMille Award in 2002 and an Honorary César in 2010 in addition to nominations for an Academy Award and four Golden Globe Awards. Read more on Wikipedia

Harrison Ford is most famous for playing Han Solo in the original Star Wars trilogy.

Time
Shrinking Is an Affront to Comedy, Psychotherapy, and Harrison Ford
The practice of setting and enforcing emotional boundaries seems pretty self-evidently healthy. What this deeply irritating new Apple TV+ dramedy proposes is, well, maybe it isn’t.
Judy Berman
IndieWire
‘Shrinking’ Is Too Cute for Its Own Good, but Harrison Ford Saves the Day
"Ted Lasso" teammates Bill Lawrence and Brett Goldstein join Jason Segel for an Apple TV+ sitcom about a therapist who goes rogue.
Ben Travers
Daily Beast
Harrison Ford Is Demeaning Himself on Laughless Therapy Comedy ‘Shrinking’
Apple TV+ You can feel the urge to laugh shriveling up and dying with each passing minute of Shrinking, a new half-hour Apple TV+ series from Jason Segel, Bill Lawrence, and Ted Lasso’s Brett Goldstein. Premiering Jan. 27, the series is about a grieving ther…
Nick Schager
Boston Herald
What to watch: ‘Shrinking’ finds Jason Segel, Harrison Ford at their best
Also worth seeing: 'Poker Face,' with Natasha Lyonne and Adrien Brody, among others, is addictive.
Randy Myers