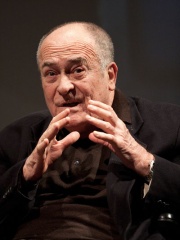 Bernardo Bertolucci (Italian: [berˈnardo bertoˈluttʃi]; 16 March 1941 – 26 November 2018) was an Italian director and screenwriter, whose films include The Conformist, Last Tango in Paris, 1900, The Last Emperor (for which he won the Academy Award for Best Director and the Academy Award for Best Adapted Screenplay), The Sheltering Sky, Little Buddha, Stealing Beauty and The Dreamers. In recognition of his work, he was presented with the inaugural Honorary Palme d'Or Award at the opening ceremony of the 2011 Cannes Film Festival.From 1979 until his death in 2018, he was married to screenwriter Clare Peploe. Read more on Wikipedia

Since 2007, the English Wikipedia page of Bernardo Bertolucci has received more than 1,440,186 page views. His biography is available in 69 different languages on Wikipedia making him the 26th most popular film director.