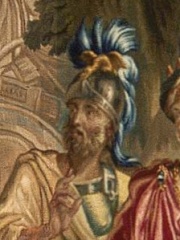 Harpagus, also known as Harpagos or Hypargus (Ancient Greek Ἅρπαγος; Akkadian: Arbaku), was a Median general from the 6th century BC, credited by Herodotus as having put Cyrus the Great on the throne through his defection during the battle of Pasargadae. Read more on Wikipedia

Since 2007, the English Wikipedia page of Harpagus has received more than 105,270 page views. His biography is available in 22 different languages on Wikipedia. Harpagus is the 473rd most popular military personnel (up from 475th in 2019), the 138th most popular biography from Iran (down from 129th in 2019) and the 4th most popular Iranian Military Personnel.

Harpagus is most famous for being the one who convinced Xerxes to invade Greece. He told Xerxes that the Greeks were weak and would not put up a fight.

Page views of Harpaguses by language

Among people born in 700 BC, Harpagus ranks 16. Before him are Phalaris, Psamtik II, Anacharsis, Necho I, Cylon of Athens, and Sinsharishkun. After him are Phraortes, Cypselus, Philip I of Macedon, Ashur-etil-ilani, Perdiccas I of Macedon, and Bakenranef. Among people deceased in 600 BC, Harpagus ranks 14. Before him are Epimenides, Phalaris, Theano, Anacharsis, Ibycus, and Cleisthenes of Sicyon. After him are Philip I of Macedon, Mimnermus, Sushruta, Arsames, Hipponax, and Miltiades the Elder.