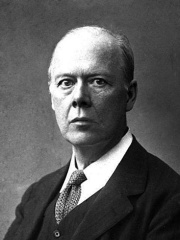 Houston Stewart Chamberlain (; 9 September 1855 – 9 January 1927) was a British philosopher and nationalized German who wrote works about political philosophy and natural science; he is described by Michael D. Biddiss, a contributor to the Oxford Dictionary of National Biography, as a "racialist writer". Chamberlain married Eva von Bülow, the daughter of composer Richard Wagner, in December 1908, twenty-five years after Wagner's death.Chamberlain's best known book is the two-volume Die Grundlagen des neunzehnten Jahrhunderts (The Foundations of the Nineteenth Century), published in 1899, which became highly influential in the pan-Germanic Völkisch movements of the early 20th century and later influenced the antisemitism of Nazi racial policy. Read more on Wikipedia

Houston Stewart Chamberlain was a British-German writer and politician who was a proponent of the Nazi Party. He was most famous for his book, The Foundations of the Nineteenth Century, in which he argued that the Aryan race was superior to all others.