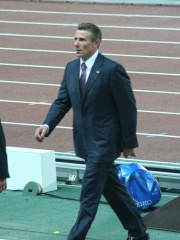 Sergey Nazarovych Bubka (Ukrainian: Сергій Назарович Бубка; born 4 December 1963) is a Ukrainian former pole vaulter. He represented the Soviet Union until its dissolution in 1991. Bubka was twice named Athlete of the Year by Track & Field News, and in 2012 was one of 24 athletes inducted as inaugural members of the International Association of Athletics Federations Hall of Fame.Bubka won six consecutive IAAF World Championships, an Olympic gold medal and broke the world record for men's pole vault 35 times. Read more on Wikipedia

Among politicians, Sergey Bubka ranks 2,351 out of 15,577. Before him are John of Brienne, Merneith, Isaias Afwerki, Andrés Manuel López Obrador, James III of Scotland, and Charles Emmanuel III of Sardinia. After him are Peroz I, Milan I of Serbia, Cleopatra IV of Egypt, Ptolemy X Alexander I, Manco Inca Yupanqui, and Æthelberht, King of Wessex.