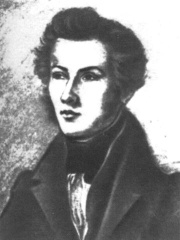 Bruno Bauer (German: [baʊɐ]; 6 September 1809 – 13 April 1882) was a German philosopher and theologian. As a student of G. W. F. Hegel, Bauer was a radical Rationalist in philosophy, politics and Biblical criticism. Bauer investigated the sources of the New Testament and, beginning with Hegel's Hellenophile orientation, concluded that early Christianity owed more to ancient Greek philosophy (Stoicism) than to Judaism. Read more on Wikipedia

Since 2007, the English Wikipedia page of Bruno Bauer has received more than 162,055 page views. His biography is available in 42 different languages on Wikipedia making him the 249th most popular philosopher.

Among philosophers, Bruno Bauer ranks 247 out of 1,005. Before him are Marsilius of Padua, Apollodorus of Athens, Nicole Oresme, Judah Loew ben Bezalel, Ivan Illich, and Bayazid Bastami. After him are Xenocrates, Chilon of Sparta, Sebastian Brant, Bias of Priene, Iamblichus, and Nikolai Berdyaev.