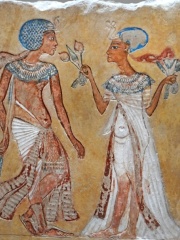 Smenkhkare (alternatively romanized Smenkhare, Smenkare, or Smenkhkara; meaning "'Vigorous is the Soul of Re") was an Egyptian pharaoh of unknown background who lived and ruled during the Amarna Period of the 18th Dynasty. Smenkhkare was husband to Meritaten, the daughter of his likely co-regent, Akhenaten. Very little is known of Smenkhkare for certain because later kings sought to erase the Amarna Period from history. Read more on Wikipedia

Smenkhkare is most famous for being the co-regent of Akhenaten, and the husband of Nefertiti.

Page views of Smenkhkares by language

Among politicians, Smenkhkare ranks 603 out of 15,710. Before him are Wilhelmina of the Netherlands, Ion Antonescu, Frederick William IV of Prussia, Władysław IV Vasa, Christian IX of Denmark, and Gustav III of Sweden. After him are Michael VIII Palaiologos, Constantine IX Monomachos, Sun Quan, Hamza ibn Abdul-Muttalib, Louis VI of France, and Elena Ceaușescu.