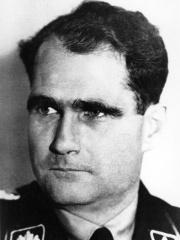 Rudolf Walter Richard Hess (Heß in German; 26 April 1894 – 17 August 1987) was a German politician and a leading member of the Nazi Party in Nazi Germany. Appointed Deputy Führer to Adolf Hitler in 1933, Hess held that position until 1941, when he flew solo to Scotland in an attempt to negotiate the United Kingdom's exit from the Second World War. He was taken prisoner and eventually convicted of crimes against peace. Read more on Wikipedia

Rudolf Hess was a high-ranking Nazi official who attempted to negotiate peace with the United Kingdom during World War II. He was captured by the British and later convicted of crimes against peace and sentenced to life imprisonment.

Among politicians, Rudolf Hess ranks 209 out of 15,577. Before him are Cleisthenes, Slobodan Milošević, Heraclius, George VI, Mahidevran, and Alexander III of Russia. After him are Mehmed VI, Yuri Andropov, Tomyris, Brutus the Younger, Xi Jinping, and Ferdinand I of Austria.