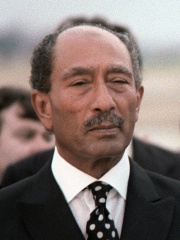 Muhammad Anwar el-Sadat (25 December 1918 – 6 October 1981) was an Egyptian politician and military officer who served as the third president of Egypt, from 15 October 1970 until his assassination by fundamentalist army officers on 6 October 1981. Sadat was a senior member of the Free Officers who overthrew King Farouk in the Egyptian Revolution of 1952, and a close confidant of President Gamal Abdel Nasser, under whom he served as Vice President twice and whom he succeeded as president in 1970. Read more on Wikipedia

Anwar Sadat was the president of Egypt from 1970 to 1981. He was most famous for signing a peace treaty with Israel in 1979.

Among politicians, Anwar Sadat ranks 226 out of 15,577. Before him are Napoleon II, Paul I of Russia, Harald V of Norway, Ibrahim of the Ottoman Empire, David Ben-Gurion, and Dwight D. Eisenhower. After him are Recep Tayyip Erdoğan, Domitian, Lucius Tarquinius Superbus, Gamal Abdel Nasser, Edward VI of England, and Odoacer.