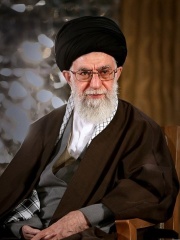 Ali Hosseini Khamenei (Persian: علی حسینی خامنه‌ای, romanized: ʼAlī Ḥosaynī Khāmeneʼī, pronounced [ʔæˈliː hosejˈniː xɒːmeneˈʔiː] (listen); born 19 April 1939) is a Twelver Shia marja' and the second and current supreme leader of Iran, in office since 1989. Previously he served as the third president of Iran from 1981 to 1989. Khamenei is the longest serving head of state in the Middle East, as well as the second-longest serving Iranian leader of the last century, after Shah Mohammad Reza Pahlavi.According to his official website, Khamenei was arrested six times before being sent into exile for three years during Mohammad Reza Pahlavi's reign. Read more on Wikipedia

Among politicians, Ali Khamenei ranks 441 out of 15,577. Before him are Horemheb, Moon Jae-in, James II of England, António Guterres, William III of England, and Louis VII of France. After him are Feodor I of Russia, Clara Zetkin, Emperor Gaozu of Han, George I of Great Britain, Vitellius, and Miklós Horthy.