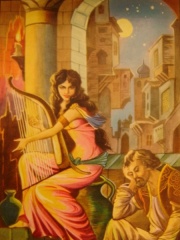 Khwāje Shams-od-Dīn Moḥammad Ḥāfeẓ-e Shīrāzī (Persian: خواجه شمس‌‌الدین محمّد حافظ شیرازی), known by his pen name Hafez (حافظ, Ḥāfeẓ, 'the memorizer; the (safe) keeper'; 1325–1390) and as "Hafiz", was a Persian lyric poet, whose collected works are regarded by many Iranians as a pinnacle of Persian literature. His works are often found in the homes of people in the Persian-speaking world, who learn his poems by heart and use them as everyday proverbs and sayings. His life and poems have become the subjects of much analysis, commentary and interpretation, influencing post-14th century Persian writing more than any other Persian author.Hafez is best known for his Divan of Hafez, a collection of his surviving poems probably compiled after his death. Read more on Wikipedia

Hafez is most famous for his poetry. He is the most read poet in Iran and Afghanistan.

Page views of Hafezs by language

Among writers, Hafez ranks 158 out of 5,755. Before him are Joseph Conrad, André Breton, Dr. Seuss, William Faulkner, Pliny the Younger, and Jean Racine. After him are Fernando Pessoa, Menander, Novalis, Ahmad ibn Hanbal, Lucian, and Naguib Mahfouz.

Among people born in 1325, Hafez ranks 1. After him are Inês de Castro, Francesco Landini, Abraham Cresques, Matthew Kantakouzenos, Acamapichtli, Rupert II, Elector Palatine, Eleanor of Sicily, and Vladislav I of Wallachia. Among people deceased in 1389, Hafez ranks 2. Before him is Murad I. After him are Pope Urban VI, Miloš Obilić, Dmitry Donskoy, Lazar of Serbia, U of Goryeo, Gülçiçek Hatun, William I, Duke of Bavaria, Chang of Goryeo, Hayam Wuruk, and Albert IV, Duke of Mecklenburg.