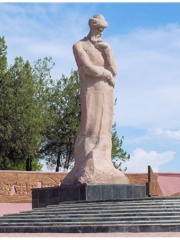 Mīrzā Muhammad Tāraghay bin Shāhrukh (Chagatay: میرزا محمد طارق بن شاہ رخ, Persian: میرزا محمد تراغای بن شاہ رخ), better known as Ulugh Beg (الغ‌ بیگ) (22 March 1394 – 27 October 1449), was a Timurid sultan, as well as an astronomer and mathematician. Ulugh Beg was notable for his work in astronomy-related mathematics, such as trigonometry and spherical geometry, as well as his general interests in the arts and intellectual activities. It is thought that he spoke five languages: Arabic, Persian, Turkic, Mongolian, and a small amount of Chinese. Read more on Wikipedia

Since 2007, the English Wikipedia page of Ulugh Beg has received more than 504,170 page views. His biography is available in 67 different languages on Wikipedia (up from 66 in 2019). Ulugh Beg is the 11th most popular astronomer, the 17th most popular biography from Iran (down from 16th in 2019) and the most popular Astronomer.

Ulugh Beg was a Muslim astronomer and mathematician. He is most famous for the observatory he built in Samarkand, Uzbekistan.

Among astronomers, Ulugh Beg ranks 11 out of 531. Before him are Giordano Bruno, Tycho Brahe, Anders Celsius, William Herschel, Aristarchus of Samos, and Edwin Hubble. After him are Hipparchus, Ole Rømer, Ja'far al-Sadiq, Carl Sagan, Giovanni Domenico Cassini, and Aryabhata.

Among people born in 1394, Ulugh Beg ranks 3. Before him are Johannes Gutenberg and Prince Henry the Navigator. After him are Charles, Duke of Orléans, James I of Scotland, Philippa of England, Cymburgis of Masovia, Ikkyū, Ashikaga Yoshinori, and Antonio Beccadelli. Among people deceased in 1449, Ulugh Beg ranks 1. After him are Ibn Hajar al-‘Asqalani, Emine Hatun, Peter, Duke of Coimbra, Hüma Hatun, and Louis IV, Elector Palatine.

Among ASTRONOMERS In Iran