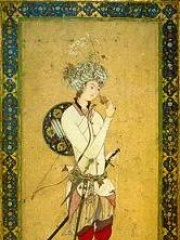 Harūn al-Rashīd (March 763 or February 766 – 24 March 809 CE; Arabic: هَارُون الرَشِيد; Hārūn Ar-Rašīd), also Aaron the Just or Aaron the Rightly-Guided, was the fifth Caliph of the Abbasid Dynasty. His birth date is debated, with various sources giving dates from 763 to 766. His epithet "al-Rashid" translates to "the Orthodox", "the Just", "the Upright", or "the Rightly-Guided". Read more on Wikipedia

Harun al-Rashid was the fifth caliph of the Abbasid dynasty and is most famous for his patronage of learning and the arts.

Among politicians, Harun al-Rashid ranks 192 out of 15,710. Before him are Puyi, Frederick II, Holy Roman Emperor, Louis Philippe I, Domitian, Francis II of France, and Edward VI of England. After him are George VI, Heraclius, Louis IX of France, George H. W. Bush, Osman II, and Muawiyah I.