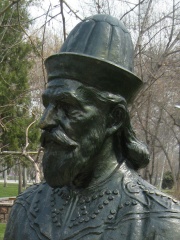 Abu Ali Hasan ibn Ali Tusi (April 10, 1018 – October 14, 1092), better known by his honorific title of Nizam al-Mulk (Persian: نظام‌الملک, lit. 'Order of the Realm') was a Persian scholar, jurist, political philosopher and Vizier of the Seljuk Empire. Rising from a lowly position within the empire, he effectively became the de-facto ruler of the empire for 20 years after the assassination of Sultan Alp Arslan in 1072, serving as the archetypal "good vizier". Viewed by many historians as "the most important statesman in Islamic history", the policies implemented by Nizam al-Mulk would go on to remain as the basic foundation for administrative state structures in the Muslim world up until the 20th Century.One of his most important legacies was the founding of the madrasa system in cities across the Seljuk Empire which were called the Nizamiyyas after him. Read more on Wikipedia

Nizam al-Mulk was a Persian scholar and vizier to the Seljuk Sultan Alp Arslan. He is most famous for his work, "The Book of Government or Rules for Kings," which is a political treatise that outlines how a ruler should govern.

Among politicians, Nizam al-Mulk ranks 545 out of 15,577. Before him are Rehoboam, Franz von Papen, Ahmose I, Emperor Wu of Han, Gideon, and Philip III of France. After him are Abdülaziz, Patrice Lumumba, John, King of England, Mahmoud Abbas, Archduke Franz Karl of Austria, and Józef Piłsudski.

Among people born in 1018, Nizam al-Mulk ranks 1. After him are Harthacnut, Michael Psellos, Pope Victor II, Bagrat IV of Georgia, Jeongjong, 10th monarch of Goryeo, and Ermengarde of Anjou, Duchess of Burgundy. Among people deceased in 1092, Nizam al-Mulk ranks 2. Before him is Malik-Shah I. After him are Vratislaus II of Bohemia, Conrad I, Duke of Bohemia, Tzachas, and Philaretos Brachamios.