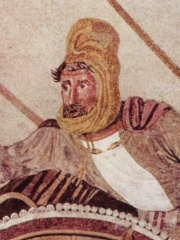 Darius III (Old Persian: 𐎭𐎠𐎼𐎹𐎺𐎢𐏁 Dārayavaʰuš; Greek: Δαρεῖος Dareios; c. 380 – 330 BC) was the last Achaemenid King of Kings of Persia, reigning from 336 BC to his death in 330 BC. Contrary to his predecessor Artaxerxes IV Arses, Darius was a distant member of the Achaemenid dynasty. During his early career, he was reportedly an obscure figure among his peers and first rose to prominence during the Cadusian expedition of Artaxerxes III in the 350s BC. As a reward for his bravery, he was given the Satrapy of Armenia. Read more on Wikipedia

Darius III was the last king of the Achaemenid Empire. He is famous for his defeat at the hands of Alexander the Great in the Battle of Gaugamela.

Among politicians, Darius III ranks 160 out of 15,577. Before him are Paul von Hindenburg, Gustavus Adolphus of Sweden, Alfred the Great, Louis IX of France, Charles VI, Holy Roman Emperor, and Ivar the Boneless. After him are Mehmed I, William I, German Emperor, Skanderbeg, Rodrigo Duterte, Alexander I of Russia, and Pol Pot.

Others Deceased in 330 BC