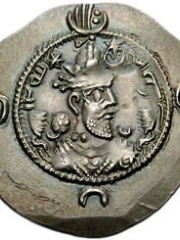 Khosrow I (also spelled Khosrau, Khusro or Chosroes; Middle Persian: 𐭧𐭥𐭮𐭫𐭥𐭣𐭩; New Persian: خسرو [xosˈroʊ̯]), traditionally known by his epithet of Anushirvan (انوشيروان [ænuːʃi:rˈvɔːn] "the Immortal Soul"), was the Sasanian King of Kings of Iran from 531 to 579. He was the son and successor of Kavad I (r. Read more on Wikipedia

Khosrow I was the king of Persia from 531-579 AD. He is most famous for his conquest of the Byzantine Empire and his introduction of Zoroastrianism as the state religion.

Page views of Khosrow IS by language

Among politicians, Khosrow I ranks 592 out of 15,577. Before him are Manuel I Komnenos, Herbert Hoover, Oscar II of Sweden, Frederick William IV of Prussia, Epaminondas, and Shah Jahan. After him are Valens, Darius II, Hans Frank, Ivan III of Russia, Ptolemy XIV of Egypt, and Wilhelmina of the Netherlands.