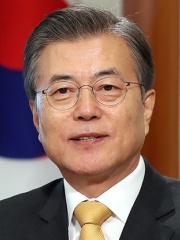 Moon Jae-in (Korean: 문재인; Hanja: 文在寅; Korean pronunciation: [mun.dʑɛ.in]; born January 24, 1953) is a South Korean politician and lawyer who is the 12th and current president of South Korea since 2017. He previously served as senior secretary for civil affairs as well as chief of staff to Roh Moo-hyun, member of the 19th National Assembly, and leader of the Democratic Party of Korea. Born to North Korean refugees, Moon was raised in poverty in the southern port city of Busan. Read more on Wikipedia

Moon Jae-in is most famous for being the first liberal president of South Korea in over a decade.

Among politicians, Moon Jae-in ranks 527 out of 15,710. Before her are Constantius Chlorus, Umar II, Neville Chamberlain, Valens, Anna of Russia, and Philip III of France. After her are George III of the United Kingdom, Ptolemy II Philadelphus, Leopold III of Belgium, Rudolf I of Germany, Maximian, and Manuel I Komnenos.