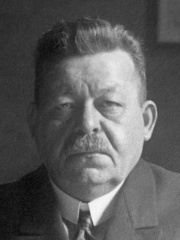 Friedrich Ebert (German: [ˈfʁiːdʁɪç ˈeːbɐt] (listen); 4 February 1871 – 28 February 1925) was a German politician of the Social Democratic Party of Germany (SPD) and the first president of Germany from 1919 until his death in office in 1925. Ebert was elected leader of the SPD on the death in 1913 of August Bebel. In 1914, shortly after he assumed leadership, the party became deeply divided over Ebert's support of war loans to finance the German war effort in World War I. A moderate social democrat, Ebert was in favour of the Burgfrieden, a political policy that sought to suppress squabbles over domestic issues among political parties during wartime in order to concentrate all forces in society on the successful conclusion of the war effort. Read more on Wikipedia

Friedrich Ebert was a German politician and the first President of Germany. He was a member of the Social Democratic Party of Germany (SPD).

Among politicians, Friedrich Ebert ranks 547 out of 15,710. Before him are Aurelian, Mustafa III, Peter II of Russia, Gorm the Old, Alexander IV of Macedon, and Sneferu. After him are Lycurgus of Sparta, Ernst Kaltenbrunner, Juliana of the Netherlands, Edward the Elder, Ivan III of Russia, and Zoë Porphyrogenita.