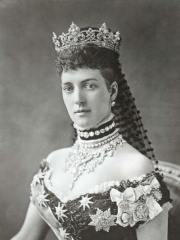 Alexandra of Denmark (Alexandra Caroline Marie Charlotte Louise Julia; 1 December 1844 – 20 November 1925) was Queen of the United Kingdom and the British Dominions, and Empress of India, from 22 January 1901 to 6 May 1910 as the wife of King-Emperor Edward VII. Alexandra's family had been relatively obscure until 1852, when her father, Prince Christian of Schleswig-Holstein-Sonderburg-Glücksburg, was chosen with the consent of the major European powers to succeed his second cousin Frederick VII as king of Denmark. At the age of sixteen Alexandra was chosen as the future wife of Albert Edward, Prince of Wales, the heir apparent of Queen Victoria. The couple married eighteen months later in 1863, the year in which her father became king of Denmark as Christian IX and her brother was appointed king of Greece as George I. She was Princess of Wales from 1863 to 1901, the longest anyone has ever held that title, and became generally popular; her style of dress and bearing were copied by fashion-conscious women. Read more on Wikipedia

Alexandra of Denmark is most famous for being the wife of Edward VII, King of Great Britain and Ireland. She was also Queen Consort of the United Kingdom from 1901 to 1910.

Page views of Alexandra of Denmarks by language

Among politicians, Alexandra of Denmark ranks 730 out of 15,710. Before her are Archduke Franz Karl of Austria, Cao Pi, James Monroe, Wilhelm, German Crown Prince, Chlothar I, and Marcus Aemilius Lepidus. After her are John the Fearless, Hussein of Jordan, Hugo Chávez, Boudica, Publius Quinctilius Varus, and Ngo Dinh Diem.

Among people born in 1844, Alexandra of Denmark ranks 12. Before her are Anatole France, Mehmed V, Bernadette Soubirous, Henri Rousseau, Ilya Repin, and Ludwig Boltzmann. After her are Umberto I of Italy, Peter I of Serbia, Mary Cassatt, Pablo de Sarasate, Friedrich Ratzel, and Menelik II. Among people deceased in 1925, Alexandra of Denmark ranks 6. Before her are Sun Yat-sen, Rudolf Steiner, Erik Satie, Gottlob Frege, and Friedrich Ebert. After her are Josef Breuer, William Jennings Bryan, Henri Fayol, Sergei Yesenin, Percy Fawcett, and Mikhail Frunze.