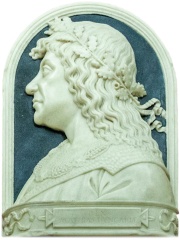 Matthias Corvinus, also called Matthias I (Hungarian: Hunyadi Mátyás, Romanian: Matia/Matei Corvin, Croatian: Matija/Matijaš Korvin, Slovak: Matej Korvín, Czech: Matyáš Korvín; 23 February 1443 – 6 April 1490), was King of Hungary and Croatia from 1458 to 1490. After conducting several military campaigns, he was elected King of Bohemia in 1469 and adopted the title Duke of Austria in 1487. He was the son of John Hunyadi, Regent of Hungary, who died in 1456. Read more on Wikipedia

Matthias Corvinus is most famous for his military success and his patronage of the arts.

Among politicians, Matthias Corvinus ranks 318 out of 15,577. Before him are Christina, Queen of Sweden, Muawiyah I, Haile Selassie, Lee Kuan Yew, Charles VI of France, and Ertuğrul. After him are Godfrey of Bouillon, Wu Zetian, Gerhard Schröder, Julian, Abdul Hamid I, and Louis XII of France.