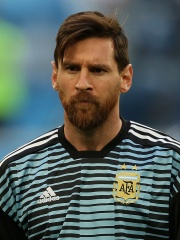 Lionel Andrés Messi (Spanish pronunciation: [ljoˈnel anˈdɾes ˈmesi] (listen); born 24 June 1987), also known as Leo Messi, is an Argentine professional footballer who plays as a forward for Ligue 1 club Paris Saint-Germain and captains the Argentina national team. Widely regarded as one of the greatest players of all time, Messi has won a record seven Ballon d'Or awards, a record six European Golden Shoes, and in 2020 was named to the Ballon d'Or Dream Team. Until leaving the club in 2021, he had spent his entire professional career with Barcelona, where he won a club-record 35 trophies, including ten La Liga titles, seven Copa del Rey titles and four UEFA Champions Leagues. Read more on Wikipedia

Lionel Messi is most famous for being a professional soccer player and captain of the Argentine national team.

The Guardian
Against all odds, Lionel Messi has one last shot at World Cup glory with Argentina | Jonathan Wilson
Questions remain for Lionel Scaloni’s side but there is a growing sense that a glorious finale could be on the cardsArgentina went to Russia in 2018 with a sense it was now or never. They had lost in the final of the previous World Cup. A great generation of …
Jonathan Wilson
Mirror Online
Lionel Messi feelings on Kylian Mbappe perfectly clear after Neymar's disgusted remark
The relationship between Neymar and Kylian Mbappe has been the subject of much discussion, and now teammate Lionel Messi has weighed in on his Paris Saint-Germain teammate
[email protected] (Tom Victor)
Daily Mail
Lionel Messi is back to his best after 'bad' first season at PSG and nets amazing chip for Argentina
Having joined the French champions last season on a free transfer from Barcelona, the seven-time Ballon d'Or winner struggled to find his feet, but has sent a warning that he is back to his best.
Dominic Hogan
NDTV News
Lionel Messi Scores Twice As Argentina Down Honduras
Lionel Messi's expertly taken double helped seal a comprehensive 3-0 win for Argentina over Honduras in Miami on Friday to extend their impressive unbeaten run ahead of the Qatar World Cup.
Agence France-Presse