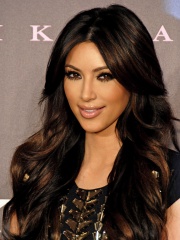 Kim Kardashian is most famous for being a reality TV star and socialite.

Thesuperficial.com
Kim Kardashian Dressed Like Princess Leia
Star Wars is a pop culture phenomenon that everyone loves, even the new generation of kids. Just check out some Halloween costumes at 30-40 year olds parties and you will definitely find an R2-D2 or a C3PO. That’s the kind of effect Star Wars still has even a…
siddharth
Eonline.com
Singer Gayle Reacts to Olivia Rodrigo's DM and Receiving Love From Kim Kardashian and North West
With her song "abcdefu" now a certified viral hit on TikTok, singer Gayle exclusively spoke to E! News about the outpour of support she's received online—including an "insane" DM from Olivia Rodrigo.
Alli Rosenbloom
Eonline.com
Watch Joe Jonas and Sophie Turner Channel Their Inner Kim and Khloe Kardashian In Hilarious Video
Joe Jonas and Sophie Turner have clearly been keeping up! The couple recreated a memorable moment from Keeping Up With The Kardashians in a hilarious video uploaded to the Game of Thrones...
Ashley Joy Parker
blogTO
Toronto designer just created three custom looks for Kim Kardashian
Kim Kardashian just came out with a new fragrance line, and she's wearing three looks made by a Toronto designer to promote it. Kathryn Bowen designed three mesh bustier looks for the reality star, in white, black and nude. It appears as if the nude look com…
Amy Carlberg