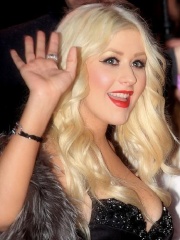 Christina María Aguilera (; Spanish: [aɣiˈleɾa]; born December 18, 1980) is an American singer, songwriter, actress, and television personality. Known for her four-octave vocal range and ability to sustain high notes, she has been referred to as the "Voice of a Generation". Aguilera rose to stardom with her eponymous debut album, for which she is credited for influencing the revival of teen pop during the late 1990s and early 2000s. Read more on Wikipedia

Among singers, Christina Aguilera ranks 329 out of 3,528. Before her are Justin Timberlake, Elis Regina, Youssou N'Dour, Justin Bieber, Basshunter, and Dusty Springfield. After her are Anggun, Joey Ramone, Linda Ronstadt, Eric Adams, Seal, and Perry Como.