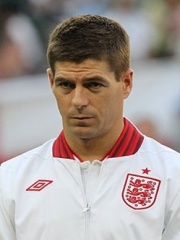 Steven George Gerrard (born 30 May 1980) is an English professional football manager and former player who manages Scottish Premiership club Rangers. He spent the majority of his playing career as a central midfielder for Liverpool, with most of that time spent as club captain, as well as captaining the England national team. Widely regarded as one of the greatest midfielders of his generation, and one of Liverpool's greatest ever players, Gerrard was awarded the UEFA Club Footballer of the Year award in 2005, and the Ballon d'Or Bronze Award. Read more on Wikipedia

Since 2007, the English Wikipedia page of Steven Gerrard has received more than 6,908,863 page views. His biography is available in 81 different languages on Wikipedia making him the 308th most popular soccer player.