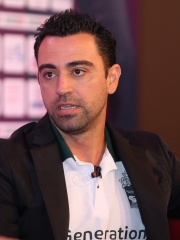 Xavier Hernández Creus (born 25 January 1980), known as Xavi, is a Spanish professional football manager and former player who is the manager of La Liga club Barcelona. Widely considered one of the greatest midfielders of all time, Xavi was renowned for his passing, vision, ball retention, and positioning.Xavi joined La Masia, the Barcelona youth academy, at age 11, and made his first-team debut against Mallorca in August 1998. In all, he played 767 official matches, a former club record—now held by Lionel Messi—and scored 85 goals. Read more on Wikipedia

Xavi is most famous for being a Spanish footballer. He played for Barcelona and the Spanish national team.

Page views of Xavis by language