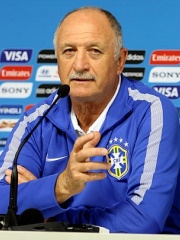 Luiz Felipe Scolari, ComIH (Brazilian Portuguese: [luˈis fɪˈɫipɪ sko̞ˈlaɾi]; born 9 November 1948), usually called Scolari or by his nickname Felipão ("Big Phil"), is a Brazilian professional football manager who currently manages Grêmio. After leading the Brazilian side to a World Cup win in 2002, he was manager of the Portugal national team from July 2003 to June 2008. He led Portugal to the final of UEFA Euro 2004, which they lost 0–1 to Greece, and to a fourth-place finish in the 2006 World Cup. Read more on Wikipedia

Luiz Felipe Scolari is most famous for being the manager of the Brazilian national team during the 2002 FIFA World Cup, where he led Brazil to its fifth World Cup title.

Among COACHES In Brazil