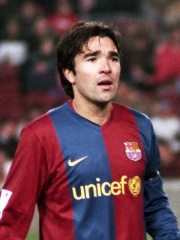 Anderson Luís de Souza (born 27 August 1977), known as Deco (Portuguese pronunciation: [ˈdɛku]), is a Brazilian-born Portuguese sports agent and retired professional footballer who primarily played as an attacking or central midfielder. After an illustrious playing career he started D20 Sports, an agency that specializes in managing Brazilian and Portuguese footballers. Deco is regarded as one of the best players of his generation.Deco is one of the few players to have won the UEFA Champions League with two clubs, with Porto in 2004 and Barcelona in 2006. Read more on Wikipedia

Page views of Decos by language