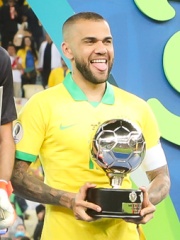 Daniel Alves da Silva (born 6 May 1983), known simply as Dani Alves (Brazilian Portuguese: [ˈdɐ̃ni ˈawvis]), is a Brazilian professional footballer who last played as a right-back for Liga MX club UNAM and the Brazil national team. Widely considered one of the greatest full-backs of all time, Alves is the most decorated player in the history of football with 46 titles at senior level, and 47 official titles overall.Starting his career at Bahia in 2001, Alves went on to have a successful six-year spell with Sevilla, winning two UEFA Cups and the Copa del Rey. He joined Barcelona for €32.5 million, becoming the third-most expensive defender of all-time at the time. Read more on Wikipedia

Daily Mail
Dani Alves rape accuser 'recognised a tattoo on his abdomen' it is claimed
The alleged victim said the former Barcelona right-back slapped her and raped her in the toilets of the Spanish city's Sutton nightclub in December.
Jack Newman, Natalia Penza
Daily Mail
Ex-wife of Dani Alves says he would 'never' sexually assault a woman following arrest in Barcelona
The former wife and agent of Dani Alves, Dana Dinorah, has said she is living a nightmare after the arrest of her ex-husband, who she says would 'never' commit the crime he is accused of
Natalia Penza
Defector.com
Dani Alves Jailed In Sexual Assault Case - Defector
Brazilian star and former Barcelona fullback Dani Alves remained in a Spanish jail on Tuesday after he was arrested late last week by Spanish police. According to the Associated Press, the investigation began after a woman told police that Alves sexually assa…
Marca
Another witness comes forward with accusation in Dani Alves case
Dani Alves&apos; hopes of mounting a successful defense have taken a turn for the worse. The former Barcelona and Sevilla player was arrested for an alleged sexual assault on a you
marca.com