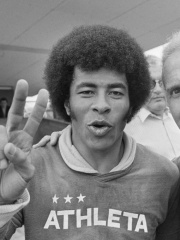 Jair Ventura Filho (born 25 December 1944), better known as Jairzinho (Portuguese pronunciation: [ʒaˌiʁˈzĩɲu]), is a Brazilian former footballer. A quick, skillful, and powerful right winger known for his finishing ability and eye for goal, he was a key member and top scorer of the legendary Brazilian national team that won the 1970 FIFA World Cup. He is nicknamed as The Hurricane for scoring limitless goals. Read more on Wikipedia

Jairzinho is most famous for his performance in the 1970 World Cup. He scored six goals and was named player of the tournament.

Page views of Jairzinhos by language