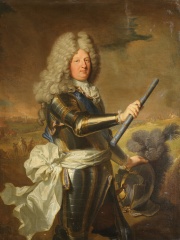 Louis (1 November 1661 – 14 April 1711) was Dauphin of France (heir apparent to the throne) as the eldest son of King Louis XIV and his spouse, Maria Theresa of Spain. He became known as the Grand Dauphin after the birth of his own son, Louis, Duke of Burgundy, the Petit Dauphin. As he died before his father, he never became king. Read more on Wikipedia

Louis, Grand Dauphin was the son of Louis XV and Marie Leszczynska. He was born on October 5, 1729. He was the heir to the throne and was the first in line to succeed his father. However, he died of smallpox on March 20, 1765 at the age of 36.

Among politicians, Louis, Grand Dauphin ranks 433 out of 15,710. Before him are Honorius, Chagatai Khan, Alfred Rosenberg, Henry II of England, Arcadius, and Baibars. After him are Ay, Otho, Albert II of Belgium, Franz von Papen, John II of France, and Jiang Zemin.