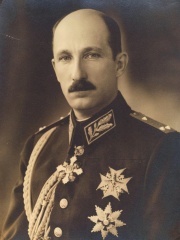 Boris III (Bulgarian: Борѝс III; 30 January [O.S. 18 January] 1894 – 28 August 1943), originally Boris Klemens Robert Maria Pius Ludwig Stanislaus Xaver (Boris Clement Robert Mary Pius Louis Stanislaus Xavier), was the Tsar of the Kingdom of Bulgaria from 1918 until his death in 1943. The eldest son of Ferdinand I, Boris assumed the throne upon the abdication of his father in the wake of Bulgaria's defeat in World War I. Under the 1919 Treaty of Neuilly, Bulgaria was forced to, amongst other things, cede various territories, pay crippling war reparations, and greatly reduce the size of its military. That same year, Aleksandar Stamboliyski of the agrarian Bulgarian Agrarian National Union became prime minister. Read more on Wikipedia

Boris III of Bulgaria is most famous for being the last tsar of Bulgaria. He was the son of Ferdinand I of Bulgaria and Marie Louise of Bourbon-Parma. Boris succeeded to the throne in 1918 after the assassination of his father. In 1944, he was forced to abdicate in favour of his son Simeon II.

Page views of Boris III of Bulgarias by language

Among politicians, Boris III of Bulgaria ranks 753 out of 15,577. Before him are Claudius Gothicus, Letizia Ramolino, Karl Liebknecht, Reza Shah, Sun Quan, and Geronimo. After him are Robert II of France, Tomáš Garrigue Masaryk, Archduke Karl Ludwig of Austria, Khosrow II, Taejong of Joseon, and Conrad III of Germany.