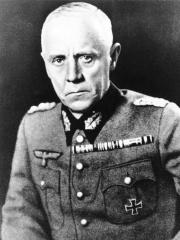 Ludwig August Theodor Beck (German: [ˈluːt.vɪç bɛk] (listen); 29 June 1880 – 20 July 1944) was a German general and Chief of the German General Staff during the early years of the Nazi regime in Germany before World War II. Although Beck never became a member of the Nazi Party, in the early 1930s he supported Adolf Hitler's forceful denunciation of the Versailles Treaty and belief in the need for Germany to rearm. Beck had grave misgivings regarding the Nazi demand for all German officers to swear an oath of fealty to the person of Hitler in 1934, but Beck believed that Germany needed strong government, which Hitler could successfully provide if the Führer was influenced by traditional elements within the army, rather than by the SA and SS. In serving as Chief of Staff of the German Army between 1935 and 1938, Beck became increasingly disillusioned and stood in opposition to the increasing totalitarianism of the Nazi regime and to Hitler's aggressive foreign policy. Public foreign-policy disagreements with Hitler made Beck resign as Chief of Staff in August 1938. Read more on Wikipedia

Ludwig Beck was a German general who was head of the army and chief of the general staff. He was one of the conspirators in the plot to assassinate Adolf Hitler on July 20, 1944.