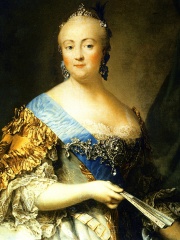 Elizabeth Petrovna (Russian: Елизаве́та (Елисаве́та) Петро́вна) (29 December [O.S. 18 December] 1709 – 5 January 1762 [O.S. 25 December 1761]), also known as Yelisaveta or Elizaveta, reigned as Empress of Russia from 1741 until her death in 1762. She remains one of the most popular Russian monarchs because of her decision not to execute a single person during her reign, her numerous construction projects, and her strong opposition to Prussian policies.The second-eldest daughter of Tsar Peter the Great (r. 1682–1725), Elizabeth lived through the confused successions of her father's descendants following her half-brother Alexei's death in 1718. Read more on Wikipedia

Elizabeth of Russia is most famous for being the longest-ruling female leader in European history.

Page views of Elizabeth of Russias by language

Among politicians, Elizabeth of Russia ranks 273 out of 15,577. Before her are Rüstem Pasha, Nursultan Nazarbayev, Philip IV of Spain, Mahmud II, Charles the Bald, and Edward III of England. After her are William the Silent, Silvio Berlusconi, Harald Fairhair, Georges Danton, Ariel Sharon, and Edward II of England.