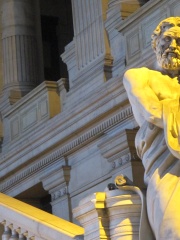 Lycurgus (; Greek: Λυκοῦργος Lykourgos; fl. c. 820 BC) was the quasi-legendary lawgiver of Sparta who established the military-oriented reformation of Spartan society in accordance with the Oracle of Apollo at Delphi. Read more on Wikipedia

Lycurgus of Sparta is most famous for his reforms that made Sparta one of the most powerful city-states in Greece. Lycurgus created a new constitution, which separated the government into three branches: the ephors, the senate, and the assembly. The assembly was made up of all male citizens, and the senate was made up of those who were elected by the assembly. The ephors were the representatives of the king, and they had the power to veto any decision made by the other two branches.

Page views of Lycurgus of Spartas by language

Among politicians, Lycurgus of Sparta ranks 481 out of 15,577. Before him are Xanthippe, Agrippina the Younger, Ibn Saud, Joseph I, Holy Roman Emperor, Artaxerxes I of Persia, and Richard II of England. After him are Lucius Verus, Peter II of Russia, Atahualpa, Alexios I Komnenos, Juan Perón, and Charles IV of France.

Others Deceased in 730 BC