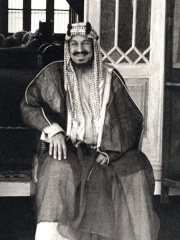 Abdulaziz ibn Abdul Rahman ibn Faisal ibn Turki ibn Abdullah ibn Muhammad Al Saud (Arabic: عبد العزيز بن عبد الرحمن بن فيصل بن تركي بن عبد الله بن محمد آل سعود‎, Abd al-'Azīz ibn 'Abd ar-Raḥman Āl Sa'ūd; 15 January 1875 – 9 November 1953), usually known within the Arab world as Abdulaziz and in the West as Ibn Saud, was the first monarch and founder of Saudi Arabia, the "third Saudi state".He reconquered his family's ancestral home city of Riyadh in 1902, starting three decades of conquests that made him the ruler of nearly all of central and north Arabia. He consolidated his control over the Najd in 1922, then conquered the Hejaz in 1925. He extended his dominions into what later became the Kingdom of Saudi Arabia in 1932. As King, he presided over the discovery of petroleum in Saudi Arabia in 1938 and the beginning of large-scale oil production after World War II. Read more on Wikipedia

Since 2007, the English Wikipedia page of Ibn Saud has received more than 3,338,769 page views. His biography is available in 72 different languages on Wikipedia making him the 684th most popular politician.

Among politicians, Ibn Saud ranks 679 out of 14,801. Before him are Raymond Poincaré, Henry I of France, Boris III of Bulgaria, Childeric I, Louis, Grand Dauphin, and Robert II of France. After him are Merovech, Boudica, Æthelstan, Vladislaus II of Hungary, Publius Quinctilius Varus, and Hideki Tojo.