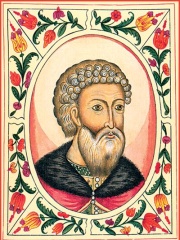 Ivan III Vasilyevich (Russian: Иван III Васильевич; 22 January 1440 – 27 October 1505), also known as Ivan the Great, was a Grand Prince of Moscow and Grand Prince of all Rus'. Ivan served as the co-ruler and regent for his blind father Vasily II from the mid-1450s before he officially ascended the throne in 1462. He multiplied the territory of his state through war and through the seizure of lands from his dynastic relatives, ended the dominance of the Tatars over Russia, renovated the Moscow Kremlin, introduced a new legal codex and laid the foundations of the Russian state. Read more on Wikipedia

Ivan III of Russia is most famous for expanding the Russian empire by conquering the Novgorod Republic, the Grand Duchy of Lithuania, and the Khanate of Kazan.

Page views of Ivan III of Russias by language

Among politicians, Ivan III of Russia ranks 596 out of 15,577. Before him are Epaminondas, Shah Jahan, Khosrow I, Valens, Darius II, and Hans Frank. After him are Ptolemy XIV of Egypt, Wilhelmina of the Netherlands, Henry II, Holy Roman Emperor, Camillo Benso, Count of Cavour, Philip the Good, and Christian IX of Denmark.