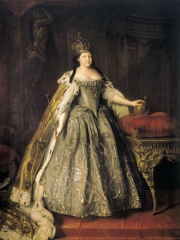 Anna Ioannovna (Russian: Анна Иоанновна; 7 February [O.S. 28 January] 1693 – 28 October [O.S. 17 October] 1740), also russified as Anna Ivanovna and sometimes anglicized as Anne, served as regent of the duchy of Courland from 1711 until 1730 and then ruled as Empress of Russia from 1730 to 1740. Much of her administration was defined or heavily influenced by actions set in motion by her uncle, Peter the Great (r. 1682–1725), such as the lavish building projects in St. Read more on Wikipedia

Anna of Russia was most famous for being the wife of Nicholas II, the last tsar of Russia.

Page views of Anna of Russias by language

Among politicians, Anna of Russia ranks 507 out of 15,577. Before her are Jean-Baptiste Colbert, Heraklonas, Sukarno, Frederick William I of Prussia, Abdulmejid II, and Norodom Sihanouk. After her are Moctezuma II, Syngman Rhee, Didius Julianus, Ludwig II of Bavaria, Aurelian, and Constantine II of Greece.